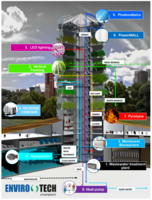 Our world is facing interrelated issues in the ecological and agricultural area! Issues concerning the environment or ecology include the decrease in biodiversity and increase in environmental pollution and weather changes (flood disasters, strong wind, heavy rains) and all this make eco systems less stable.

All issues concerning agriculture or food include the dwindling number of local farmers due to ageing and loss of arable land area due to urbanization and desertification, salt accumulation on the soil surface and soil contamination with toxic substances. Expected rise of population up to 9 billion in 2050 will require about 50% higher food production.

Over 70% of population will be living in urban area. Increasingly serious are becoming shortage of clean water, food fossil, plant biomass, the so-called "food deserts" is another related issue that has recently emerged in which people have no access to fresh vegetables and fruits. Fresh products are transported in average over 1200 km (USA, CANADA, and EUROPE). US prof. Despommier in 2010 proposed the concept of "Vertical Farming" which has had a strong impact on scientists, engineers, policy makers, architects!

Actually our company "ENVIRONMENT COMMERCE CZ" from Prague put into operation in 1994 the very first unit for biological waste water treatment combined with one store planting without commercial background. The idea was to use released CO2 from biological degradation of organics for better photosynthesis and use the heat from treated water! Excess sludge and capillary suction of water from it was source of water for planting mainly flowers and better hydrolysis to release ions for planting crops, herbs and flowers! In the meantime same company put into operation small scale intensive fish farm /Tilapia Nillotica/ with water recycling where within 4and a half months average fish production from each "m3" was over 300kg of fresh fish!

These challenging results forced our company to work in the next period in so called "Indoor farming systems for efficient use of waste, heat, solar energy and CO2 in order to create better conditions for energy transfers, crops and herbs production, fish production, and water treatment following the processes in the nature as they are! System was named ENVIROTECH SMARTPLANT ECO-AGRO-AQUA shortly /EAA/. Results, open new world of better understanding of living nature around, and changed the biological treatment processes from an issue consisting of prevailing technical measures /mainly excavation, concreting, reinforcement, shuttering, scaffolding and similar construction works plus pumps, water canalization, air blowers, valves and pipelines! All items were used to treat waste water result of which was many years reduced into the simply word "wastewater treatment "for often huge investment and high operation cost! Lately all above mentioned activities were converted into "combined ecological and economical solutions in harmony with our mother nature"

By 2030 the population in agricultural areas is predicted to decrease to 3 billion due to ageing of farmers, while the population in urban area will exceed 5 billion. Therefore the current system of producing almost all food including fresh food in agricultural areas and transporting it to urban areas needs to be changed in the coming decades. /prof. Despommier 2010/

In order to enhance local production for local consumption of clean and fresh vegetables plant factory with artificial lighting /PFLA/ have become increasingly important especially for countries having densely populated urban areas! In the near future so-called sustainable systems will combine infrastructure and production of fresh food in one ECOSYSTEM we named it EAA that will control water processes, light energy, heat production, and CO2 release to maximize benefits using minimum resources!

On the bases of water parameters, energy of light, CO2 and electric energy, it is possible to estimate rough potential of photosynthesis, rate of transpiration and increase of fresh crops weight. Today we can optimize the rates of input and outputs! Increasing interest and huge demand for information on various aspects of combined ecological and economical systems are real evidence of it.

This system can be fully self-sufficient /depending of order of magnitude the bigger the better principle, but to secure all processes against any electrical failure caused by energy drop off, especially smaller systems must be grid connected or backed by stand by generator!

Heating performance is secured by heat pump and treated water energy, electrical lighting and compressors are connected to high efficiency accumulators feeded by photovoltaic system! Such systems have a huge social aspect connected with intensive and independent of local conditions new way of controlled and intensified fresh production of food and crops just closed to the cities where new generation of well educated people will find out new traces to intelligent society! "Smart towns, smart villages, Industry 4" will not be empty imagination, but part of our real life in 21 Century! For sure this way will create millions jobs and business opportunities for the people around globe and will provide better environment and higher living standard